The Kingdom of Bhutan is a landlocked nation in South Asia, located at the eastern end of the Himalaya Mountains and is bordered to the south, east and west by the Republic of India and to the north by Tibet. Bhutan is separated from Nepal by the Indian state of Sikkim. The Bhutanese call their country Druk Yul which means "Land of the Thunder Dragon".

Bhutan used to be one of the most isolated nations in the world, but developments including direct international flights, internet, mobile phone networks, and cable television have increasingly opened the doors. Yet, Bhutan has balanced modernization with its ancient culture and traditions under the guiding philosophy of Gross National Happiness (GNH). Rampant destruction of the environment has been avoided. The government takes great measures to preserve the nation's traditional culture, identity and the environment. Accordingly, in 2006 Business Week rated Bhutan the happiest country in Asia and the eighth happiest country in the world citing a global survey conducted by the University of Leicester in 2006 referenced to as the "World Map of Happiness".

The landscape ranges from subtropical plains in the south to the Himalayan heights in the north, with some peaks exceeding 7000 metres (23000 ft). The state religion is Mahayana Buddhism, and the population is predominantly Buddhist, with Hinduism being the second-largest religion. The capital and largest city is Thimphu. After centuries of direct monarchic rule, Bhutan held its first democratic elections in March 2008. Among other international associations, Bhutan is a member of the United Nations and the South Asian Association for Regional Cooperation (SAARC).

Stone tools, weapons, elephants, and remnants of large stone structures provide evidence that Bhutan was inhabited as early as 2000 BC, although there are no existing records from that time. Historians have theorized that the state of Lhomeon (literally, "southern darkness", a reference to the indigenous Mon religion), or Monyul ("Dark Land", a reference to the Monpa, the aboriginal peoples of Bhutan) may have existed between 500 BC and AD 600. The names Lhomon Tsendenjong (Sandalwood Country), and Lhomon Khashi, or Southern Mon (country of four approaches), have been found in ancient Bhutanese and Tibetan chronicles.

The earliest transcribed event in Bhutan was the passage of the Buddhist saint Padma Sambhava (also known as Guru Rinpoche) in 747. Bhutan's early history is unclear, because most of the records were destroyed after fire ravaged the ancient capital, Punakha, in 1827. By the 10th century, Bhutan's political development was heavily influenced by its religious history. However, there is no sufficient information stating that all historical records were available before the fire. Various sub-sects of Buddhism emerged which were patronised by the various Mongol warlords. After the decline of the Mongols in the 14th century, these sub-sects vied with each other for supremacy in the political and religious landscape, eventually leading to the ascendancy of the Drukpa sub-sect by the 16th century.

Until the early 17th century, Bhutan existed as a patchwork of minor warring fiefdoms, when the area was unified by the Tibetan lama and military leader Shabdrung Ngawang Namgyal who fled religious persecution in Tibet. To defend the country against intermittent Tibetan forays, Namgyal built a network of impregnable dzong (fortresses), and promulgated a code of law that helped to bring local lords under centralised control. Many such dzong still exist and are active centers of religion and district administration. After Namgyal's death in 1651, Bhutan fell into civil war. Taking advantage of the chaos, the Tibetans attacked Bhutan in 1710, and again in 1730 with the help of the Mongols. Both assaults were successfully thwarted, and an armistice was signed in 1759.

In the 18th century, the Bhutanese invaded and occupied the kingdom of Cooch Behar to the south. In 1772, Cooch Behar appealed to the British East India Company which assisted them in ousting the Bhutanese, and later in attacking Bhutan itself in 1774. A peace treaty was signed in which Bhutan agreed to retreat to its pre-1730 borders. However, the peace was tenuous, and border skirmishes with the British were to continue for the next 100 years. The skirmishes eventually led to the Duar War (1864-1865), a confrontation for control of the Bengal Duars. After Bhutan lost the war, the Treaty of Sinchula was signed between British India and Bhutan. As part of the war reparations, the Duars were ceded to the United Kingdom in exchange for a rent of Rs. 50,000. The treaty ended all hostilities between British India and Bhutan.

During the 1870s, power struggles between the rival valleys of Paro and Tongsa led to civil war in Bhutan, eventually leading to the ascendancy of Ugyen Wangchuck, the ponlop (governor) of Tongsa. From his power base in central Bhutan, Ugyen Wangchuck defeated his political enemies and united the country following several civil wars and rebellions in the period 1882-1885.

In 1907, an epochal year for the country, Ugyen Wangchuck was unanimously chosen as the hereditary king of the country by an assembly of leading Buddhist monks, government officials, and heads of important families. The British government promptly recognised the new monarchy, and in 1910 Bhutan signed a treaty which "let" Great Britain "guide" Bhutan's foreign affairs. In reality, this did not mean much given Bhutan's historical reticence. It also did not seem to apply to Bhutan's traditional relations with Tibet. The greatest impact of this treaty seems to be the perception that it meant Bhutan was not totally sovereign. 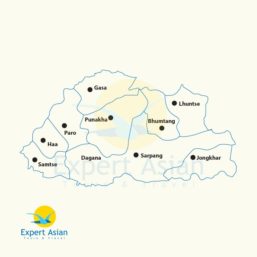